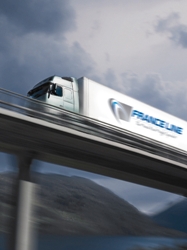 France Line, specialists in road freight between UK and France, wanted to raise their profile, and approached Tigerfish PR to create a 4 month campaign. The company has 5 employees, and was unsure what angles could be taken with a  PR campaign.

Following a review of the stakeholders and analysis of possible news angles, we created a campaign (August -November 2013) to position France Line as the leading road freight firm for moving goods from UK to France.

This used a combination of items regarding new initiatives, combined with topical quotes from France Line MD, Marie Boyer.

We gained media coverage about France Line becoming part of the Astre network in France, and this was closely followed by comments from Marie Boyer on the proposed French Ecotaxe.  Now seem as somewhat of an expert on the tax and its implications to UK exporters, Marie has been quoted in Logistics Manager, the Greater Manchester Chamber of Commerce, Lloyds Loading List,  Handy Shipping Guide  and the BBC interviewed her for a story on it too.

And because of Tigerfish’s press campaign,  Freight Business Journal (FBJ) interviewed Marie from France Line for their feature on France (out December 2013), and she has participated in the prestigious NW Insider roundtable on Logistics, alongside other key opinion leaders in the area.

This has lead to at least one new client, and really positive links to others… as well as raising the profile of France Line, their reputation as being knowledgeable on all things French logistics and of course, firmly establishing Marie Boyer as an industry expert.

Some nice comment in Lloyds Loading List regarding the UK Chancellor’s Autumn Statement, and just confirmed is Marie Boyers participation as a panellist on Insider magazine’s Logistics breakfast briefing in January 2014