Have a you ever had a poor experience in a store? Do you tell anyone? Well yes of course you do. We are twice as likely to relate a tale of poor service, than one of praise for a retailer. So on that note let me tell you of my experience at Doorway to Value in Chorley…

I was drawn to the sparkly lighting section a few weeks ago, was mooching around aimlessly, when oh goodness, in a catalogue, they had JUST the floor lamp I’d been looking for. And rather unexpectedly, they said (when asked) that it was £38. What a bargain. These lights are usually treble that. So I checked the price with the assistant. Yes, definitely £38. “I’ll have it!” I said, paid by card, and trundled off with my receipt, confident in the knowledge they would get it from the warehouse and let me know when I could take it home.

So far, so unremarkable. They phoned the next day. Could I ring them? Turns out, that there had been a mistake, they said. The young girl who served me had given me the wrong price, they said. She was terribly upset and had been in tears they said. So they would gladly refund my money… or I could pay the £130-ish which it should have been.

How odd. What would you do? I understood we had had a contract. They had agreed to sell something to me, I had agreed to buy it, and they had taken my money. Surely that was a contract?  No, they said. I was wrong. A compromise too seemed out of the question, until I persevered. OK, £78 they said.

Citizens Advice Bureau had a different take on the matter (see an extract of their email below).  In fact, I decided not to pursue the matter, so have accepted the refund.

But just think about this from a comms point of view. They had a training issue, and hey mistakes happen. It could have been readily resolved. Take it on the chin. The numbers were not large… I don’t know the markup on lighting products, but does 100% seem reasonable? So they are probably what? £31 out of pocket?

For £31, they have an unhappy customer. An unhappy customer who has told lots of people.  We all know that getting good media attention, good customer retention and good footfall isn’t cheap. £31 isn’t a lot to spend on it.

Which is why I urge my clients to make sure there own staff are brand ambassadors. That each person we see, no matter how high up or low down in the organisation… IS the organisation to a customer.

And any business who thinks otherwise is very mistaken. 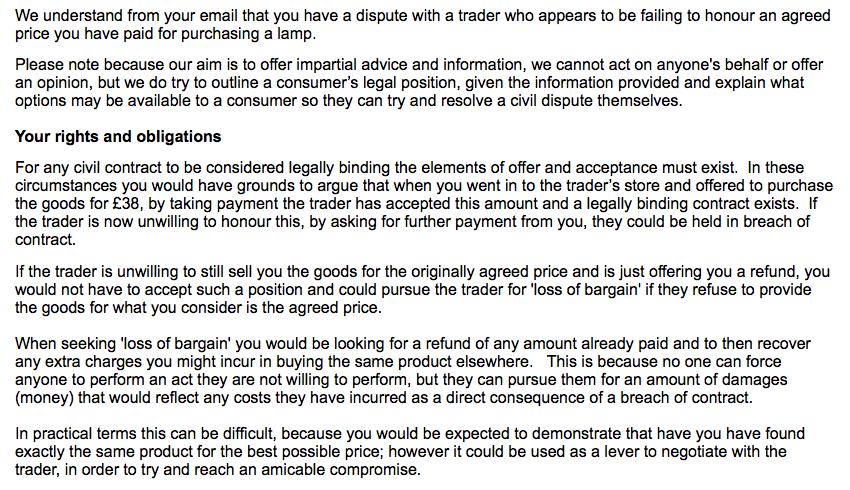